Here at Locaux!, the door is always open (or mic on), ready to receive women of wisdom, courage, fortitude and tenacity. This is one such moment.

I this episode, I had the pleasure of hearing about the unwavering passion of female empowerment from a dynamic woman. 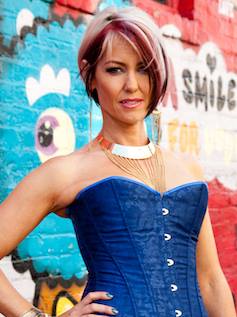 Communication Activist and Creative Strategist, Penny L. Sampson spends the majority of her time training women of all ages how to communicate assertively so they have the confidence to defy the toxic societal norms and dispel the myths that have forced them into silence and subjugation.

As a wild child, art loving, introverted non-conformist female, who was educated in the halls of hard knocks, Penny L. Sampson wears her colorful and varied background like a badge of honor.

With an untameable desire to change how Women show up in the world, she has spent 17 of the past 20 years embroiled in studying the human condition, the mind and the methodology of fear based manipulation before founding SHE ROCKS LIFE™.

SHE ROCKS LIFE™ IS A VISION, MISSION AND CONCEPTION

Founded with a rebellious spirit and a bold objective: to pave the way for social, professional and economic change by breaking the rules, defying the societal norm and and dispelling the myths that have forced women into silence and subjugation.

SHE ROCKS LIFE™ is a call to action as much as it is a call to social consciousness. Together we are going to alter the state of “being” Woman to one that no longer accepts blame, shame, guilt, judgment and excuse as normal.

We do Communication by Design.